The Long Neck Sunrise Rotary Club joined with the Oak Orchard Riverdale American Legion Post 28 and the Warrior Community Connect (WCC) organization to sell flags in its Flags for Heroes program, proceeds of which will go to support the veteran causes of Post 28 and WCC. $3,200 was raised by selling 64 flags at $50 each, via a two-month fund raising effort capped off by a Flags for Heroes fund raiser on October 25, 2019 at the American Legion Post 28, 31768 Legion Rd, Millsboro, DE 19966. 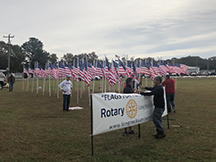 The Long Neck Sunrise Rotary Club has sponsored a Flags for Heroes program since 2015, displaying sponsored flags on the grounds of the American Legion Post 28 during the weeks leading up to Veteran’s Day. In 2018 the club was able to obtain 50 sponsors of flags. This year’s total of 64 was a respectable increase and hopes are that the momentum will continue into future years. Joining with the American Legion Post 28 and 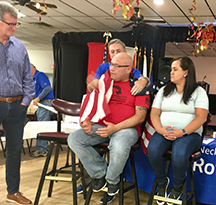 Warrior Community Connect is the first time the Rotary Club has entered into such a partnership to meet its fund-raising objectives, all proceeds of which will benefit veterans in need. 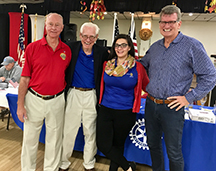 pulling together to host the event and sell the flags,” notes Long Neck Sunrise Rotarian Fred Gibbs, co-chairman of this year’s Flag for Heroes project. “We expect the event to get better and better.”

Flags were posted on Saturday, October 26, 2019 by members of the Long Neck Sunrise Rotary Club. The impressive flag display can be viewed at the corner of John J Williams Highway and 31768 Legion Road on the front lawn of the American Legion Post 28 property. It will be on display through November 16. Those who purchased flags can find the flag for their hero by using the numbers posted with the flags which are keyed to a sign of heroes and sponsors posted at the display.